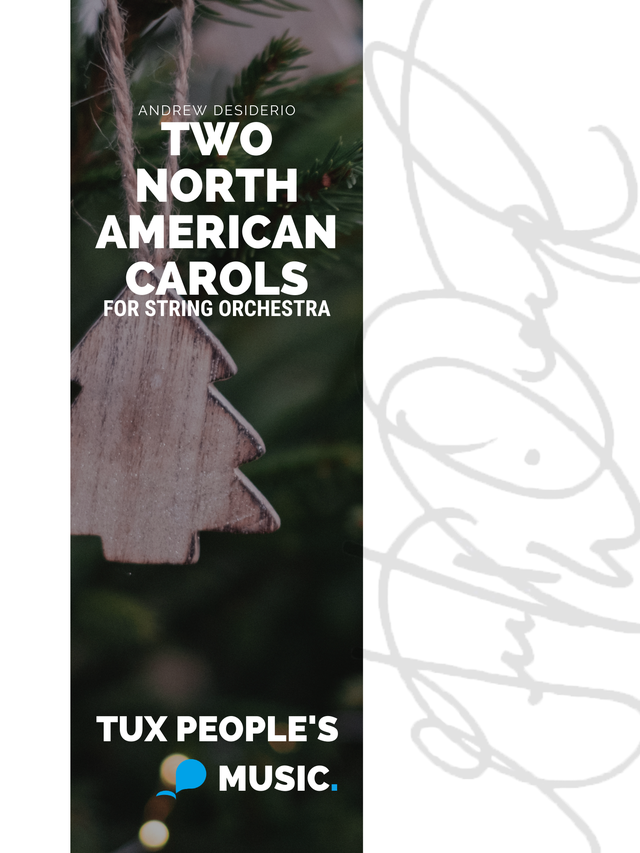 These two early American Carols, unified by the use of a passage from “O come, let us adore him,” will shine on any holiday-themed program. Desiderio’s beautiful reimagination of these classic tunes is perfect for any medium-advanced ensemble!

$15.00
Shop
​​​Prefer to purchase this title through one of your favorite online/local retailers?
BROWSE THEM HERE!
<
>
​Violin Ia
Violin Ib
Violin IIa
Violin IIb
Viola I
Viola II
Cello I
Cello II
Contrabass
These two Christmas carol settings were written in November 2019. Aside from their geographical origins, these pieces share another commonality: they were written by people who emigrated to North America from their European homelands. Jean Brebeuf was a French Jesuit missionary who settled in Quebec in 1625 with the intent of converting the Huron people to Christianity. Through modern eyes, the respectability of such a mission is questionable at best, but Canada can at least remember Brebeuf for composing the country’s first known Christmas carol. Brebeuf’s original text, written in the Huron language, tells the story of the birth of Christ and is set to a French folk song. My setting is essentially a theme and variations that exploit both the euphonious sound of the string orchestra and the contrapuntal possibilities of the theme itself.

Pietro Yon, one of the most respected organists of his time, left his native Italy in 1907 to settle in New York City, where he eventually took up the prestigious post of music director at St. Patrick’s Cathedral. He composed “Gesu Bambino”, his best-known composition, in 1917 while serving as director of music at the Church of St. Francis Xavier. He uses the “O come, let us adore Him” passage from “Adeste fidelis” (better known as “O come, all ye faithful) as the basis for the song. In this setting, I used Yon’s basic harmonic structures, but enriched the harmony and took greater advantage of the theme’s inherently canonic nature, as in the “Huron Carol”.
​
Both of these pieces are in the key of G, and use the “O come, let us adore him” passage as a binding element. Since the string orchestra lends itself particularly well to arrangements of vocal-inspired music, it was a logical choice of instrumentation for a work that I hope musicians and audiences will enjoy.