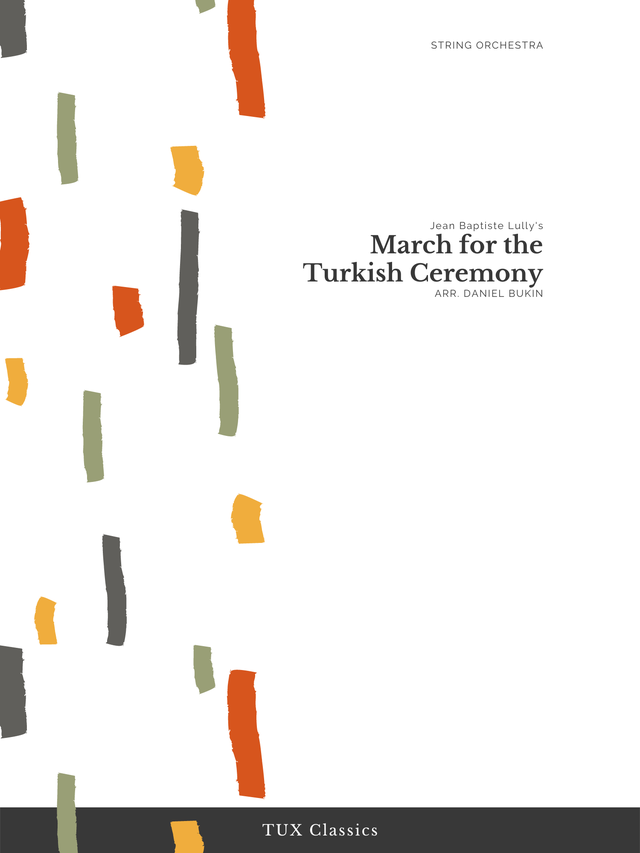 March for the Turkish Ceremony

Brilliantly combining satire with pomp and spectacle, Jean-Baptise Lully's March for the Turkish Ceremony gets new life in this interpretation by Daniel Bukin! Featuring additional percussion, this work is a constant crescendo that leads to a spectacular ending!

$15.00
Shop
​​​​​Prefer to purchase this title through one of your favorite online/local retailers?
BROWSE THEM HERE!
<
>
​Opt. Field Drum
​
Violin I
Violin II
Violin III
Viola I
Viola II
Cello
Contrabass
Jean-Baptiste Lully (1632 - 1687) was a French composer during the Baroque era who, in collaboration with other artists at the time, helped to pioneer early forms of performing arts that we know today, including ballet. Together with the author Molière and choreographer Pierre Beauchamp, the trio wrote Le Bourgeois gentilhomme (The Bourgeois Gentleman). It is a five-act comédie-ballet – a play intermingled with music, dance, and singing – satirizing bourgeois personality, and poking fun both at the vulgar, pretentious middle-class, and the vain, snobbish aristocracy.

Marche pour la Ceremonie des Turcs (The March for the Turkish Ceremony) is taken from Act IV and depicts the grand procession of Turkish musicians and dancers.

This arrangement is an amalgam of many different interpretations of the piece I have found over the years. Lully’s original work calls for five voices. But rather than stating them all at the beginning, I introduce each one little by little, starting with the bass and gradually adding higher voices until we get the full ensemble at measure 41. All the while, each section plays a prolonged crescendo throughout the piece until the very end when we get a true fortissimo sound. In addition, while the original score does not explicitly include percussion, percussion instruments are very often added in performance of the original work. As such, I have included finger cymbals and sleigh bells in the concert band version.
In the string orchestra and flex band versions of this piece, the field drum (or large tom-tom) is optional, but highly encouraged.

As this music comes from the baroque era, one stylistic note to remember when preparing this piece is that all trills start on the upper note (indicated in parenthesis before the main note).