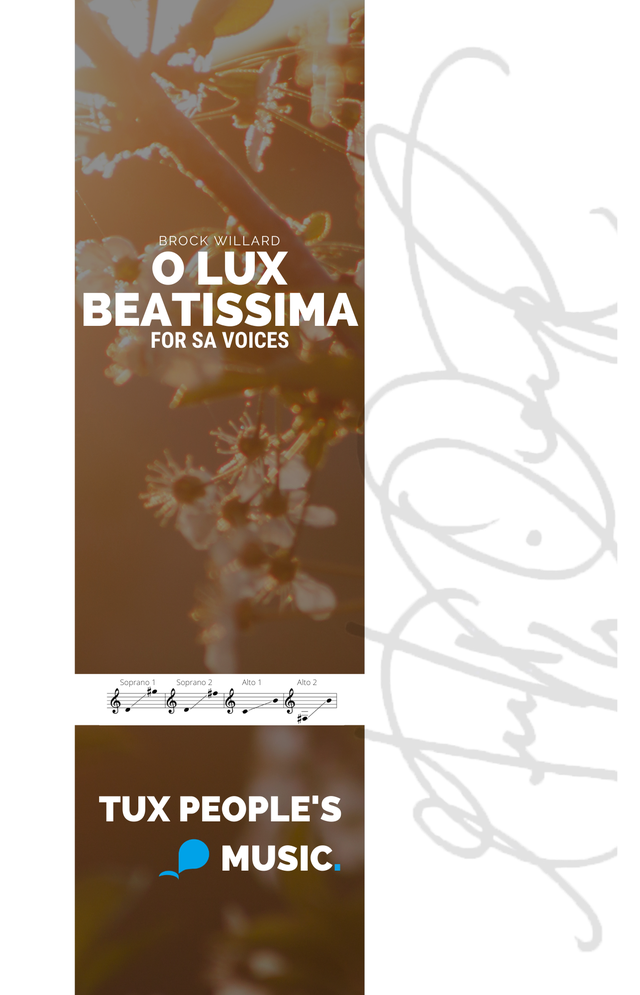 Brock Willard’s setting of this classic Latin text is a perfect demonstration of modern technique mixed with traditional sound. O Lux Beatissima is a wonderful introduction to easy aleatory for any Soprano-Alto Choir seeking to expand into modern harmonies.

$87.50
Shop
​Prefer to purchase this title through one of your favorite online/local retailers?
Browse them here
<
>
Soprano 1
Soprano 2
Alto 1
Alto 2
Performance Notes:
This piece may be performed by a quartet or a small ensemble, but in the instance that a group larger than 12 or 16 wishes to perform the piece, there are a couple of suggestions to make the rehearsal and performance of the limited aleatory sections starting at Box 29 as smooth as possible.

There a few options an ensemble could choose:
The sections using limited aleatory are not to be conducted and the conductor should only give cues for the individual motives to begin repeating indicated by the white arrows. Rhythms are approximate and thus, rhythms that line up in the score do not necessarily line up in performance. Conversely, rhythm in the conducted sections are to be performed exactly as notated.

Breaths at text repetitions or commas with harsh consonants such as [ks] at the end of the word "lux" are notated by the use of "x" note heads and where there is no rest notated in conjunction with an "x" note head, the release of the consonant should also act as the breath.

​The settings of the "beatissima" in measure 15 and similar scenarios are not misprints and should be performed as written regardless of other instances where there is a clear separation between the syllables as indicated by the sixteenth rest in the middle of the dotted eighth-sixteenth figure.