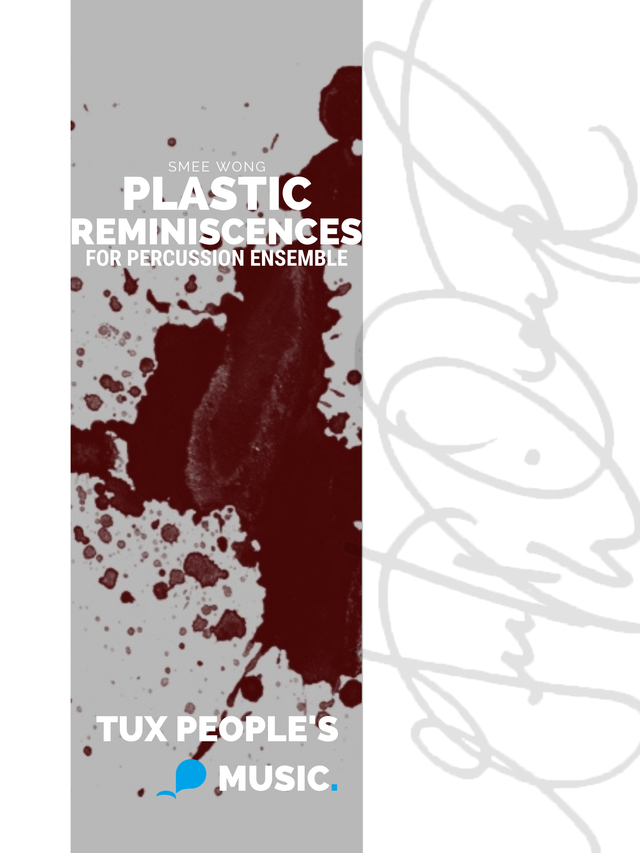 Smee Wong’s epic dance-inspired suite for percussion trio is a perfect feature for your program! It is well-varied, from subtle to bold and thoughtful to aggressive, but never steps too far out of bounds for its source material.

$35.00
Shop
​​Prefer to purchase this title through one of your favorite online/local retailers?
browse them here!
<
>
I. Prelude: Prenup
P1: xylophone
P2: vibraphone
P3: marimba

VIII. Epilogue: Right to Silence
​P1: vibraphone
P2: marimba
P3: tam-tam, tubular bells
My experience being a host and music director at the campus radio station offers me an up close view of pop culture. This piece is a modern recollection of a Baroque dance suite, in which I blend classical music with contemporary dance forms (such as jazz, Latin, house, trance, etc.) and elements of Balinese gamelan, Hula music, and African interlocking rhythms. Living in these superficial times, this is my interpretation of what a dance suite would be today.

I. Prelude: Prenup
Prelude shows a hint of this piece, and it echoes in some cases in real life, the prenuptial agreement is the beginning or the end of a marriage.

II. Allemande: Annulment
Allemande borrowed the old allemande rhythmic pattern, and fuse with gamelan’s orchestrion principle. Between the A section and recap, a “techno-like” section is inserted.

III. Courante: Autopsy
Courante starts with a bossa nova pattern, with a fast courante melody above it played by glockenspiel. Throughout the development of this section, some “wrong notes” are gradually introduced, and it implies a beautiful yet lifeless corpse. The middle section uses the exact rhythm and structure of the first section of J.S. Bach’s English Suite VI Courante (1715-20), with newly composed atonal voices. In order to mimic the process of an autopsy, an outrageous combination of elegant atmosphere with fierce content is created. A pitchless C section is a contemporary interpretation of African interlocking rhythm. At the end of this movement, the final section returns to the Latin pattern, which represents the stitched corpse. Towards the end, a gamelan like theme echoed the previous movement’s characteristic.

IV. Interlude: Alibi
Interlude foreshadowed the later movement. It is a slow and mostly quiet bridge, which is the evidence of the absence of suspect’s of the crime scene.

​V. Sarabande: False Confession
Sarabande is written in rondo form and is inspired by the documentary Casting Jon Benet (2017). It begins with a counterpunctual sarabande refrain— some of the episodes call back to fake memories by quoting a selection of highly representative Russian ballet music.

VI. Air: Polygraph
Air is the only movement that’s involved pre recorded material. A polygraph scene is recreated by literally mimicking the heartbeat, the sound of a polygraph machine. The main theme is based on Movement IV Prelude’s chord progression. Both the artificial yet innocent “hula-like” passage fuse with a jazz improvisational transcription showcase a trail environment.

VII. Gigue: Filicide
Gigue starts with a lullaby, with the percussionist’s humming. The pitch less theme from the Third movement has brought back.

VIII. Epilogue: Right to Silence
​A summary of the piece. Materials are from Movement I, II, VI with a soft and gentle manner.