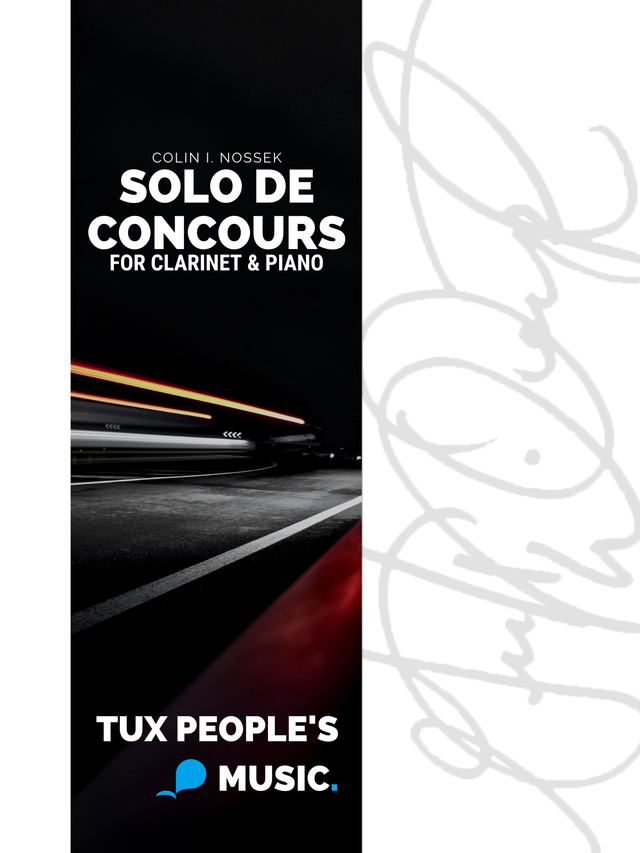 Janky at times, energetic at others, Solo de Concours will rouse the heart of any audience. Its thoughtful writing and exploratory harmonies will challenge any clarinetist looking for a medium to medium-advanced work without the commitment of a longer piece.

$18.00
Shop
​​Prefer to purchase this title through one of your favorite online/local retailers?
browse them here!
<
>
​Solo with Piano
Solo de Concours was written in 2020 for the 2nd annual Fred Fox School of Music Morceau de concours; a woodwind competition modeled after the Paris Conservatory’s historic Premiere Prix. Unfortunately, due to the the COVID-19 pandemic shutting down schools, the contest did not take place as initially planned. Instead, it became a smaller studio-wide competition where the performers would submit a recording of themselves playing alongside a MIDI mockup of the accompaniment instead of a live pianist.

As a clarinetist, much of the repertoire I play comes from the Paris Conservatory competition; staples of the repertoire such as Debussy’s Premiere Rhapsody and Andre Messager’s and Henri Rabaud’s Solo de Concours were written for this competition. In this piece, I pay homage to the Paris tradition through the structure. It is very sectional, and each section asks a different challenge of the player: Lyricism, technical proficiency, and rhythmic integrity. However, the harmonic and melodic characteristics of the piece are very distinctly my own. When I first showed it to my professor, Dr. Kay He, her first comment was “This is very you.”